Join us for the final Women in Business lunch of the year, featuring Dr. Christa Martin. 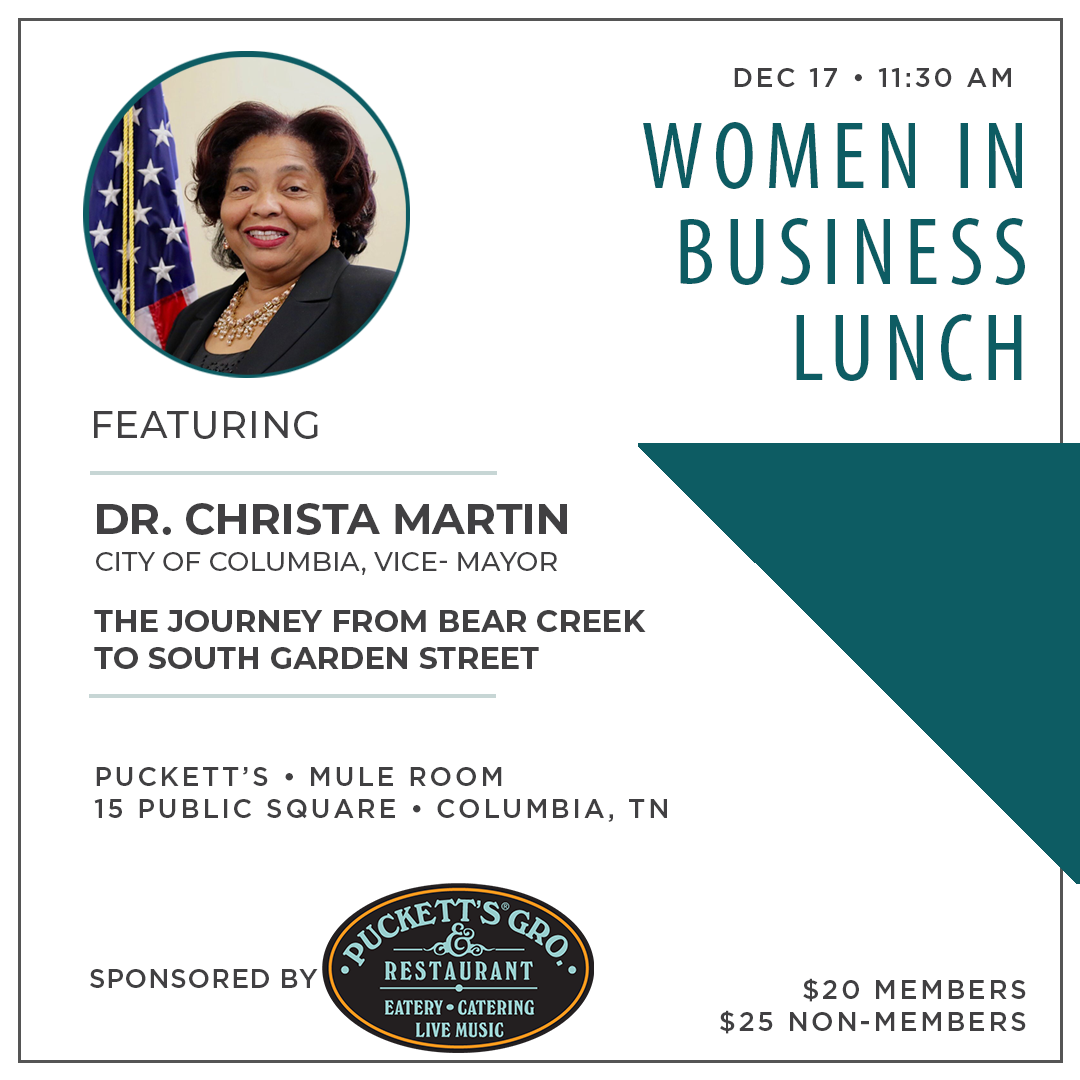 We will be collecting toy donations for the Family Center's 'Santa Workshop'. They have a shortage of gifts for older boys (age 10+). Recommended items include: balls, headphones, games, hoodies, etc.

About Dr. Christ Martin:
Dr. Christa Secrest Martin was born in Columbia, Maury County, Tennessee in December of 1955 as the second child of Ernest and Ruthie Thornton Secrest.  They had seven children, Earnest, Mira, Michael, Felecia, Darryl and Trent.

She grew up on a 100 acre farm owned by her grandmother Lucy Secrest Ogilvie Smith adjacent to an over 725 acre farm that was worked by her grandmother’s three brothers and the Ogilvie and Secrest families and their hired farm workers.  They raised milk cows, beef cows, pigs, chickens, horses, a 2-acre garden, 16 acres of tobacco, 12 acres of been hay and other farm products.  The farms were 1 mile off Old Bear Creek Pike on Cliff Amis Road and there were no street lights.  Her family still owns the 100 acres.  She attended church at New Smyrna Cumberland Presbyterian Church 1.5 miles from her house.  Her church was a one room church with a pot belly stove, a piano and 16 church pews.

Ms. Martin attended first grade at Center Star School, one road from her house.  The school had twelve grades and one teacher.  The school was a Maury County School with two classrooms and a pot belly stove.  The school was closed in 1963 and Ms. Martin had to ride the school bus from her parents’ home to College Hill Elementary School.  She attended that school from 2nd to 6th grade.  Her teachers were Mrs. Taylor, Mrs. Camille Howell, Mrs. Dennard, Mrs. Amanda Arnell, and Mrs. Alma Johnson. She attended Whitthorne Jr. High School from 7th to 9th grade.  Mrs. Martin sang in the Glee Club for two years at Whitthorne.  She attended Columbia Central High School in the 10th to 12th grade.  She was involved in Student Government and was Senior Class Secretary, played varsity basketball as a senior and was an Honor Roll “A” student.  She graduated high school in 1973.

Ms. Martin attended Columbia State Community College and majored in data processing as a freshman, sophomore and one extra quarter.  She graduated magna cum laude with a 3.7 GPA in her Associates degree in May 1975.  She attended Middle Tennessee State University for her Bachelors’ degree and graduated with a 3.5 GPA in Business Administration, majoring in Management and Accounting in December 1976.  She also received her Master’s degree from Middle Tennessee State University majoring in computer information systems in December 1988.  She attended Nova Southeastern University in Fort Lauderdale, FL for her Doctoral degree in Higher Education Leadership graduating with a 3.8 GPA in December 2012.  Additional education includes completing the Tennessee Board of Regents Maxine Smith Fellows program in 2005.